As of his 100th birthday on this rainy April 30th, Captain Tom Moore has raised over £30 million for the NHS as it continues to battle the COVID-19 pandemic.

How did this brave veteran of the Second World War’s arduous Burma and Indian campaigns achieve such a feat? Ultimately, it was his endurance, and his humility.

Setting out originally to raise £1000, Captain Tom’s story was broken by BBC anchor, Peter Levy, and from there, his story really went viral, and rightfully so.

For his 100th year, Tom walked 100 lengths of his garden, adorned in his wartime medal and flanked (at a two meter distance!) by his beloved Yorkshire Regiment.

For his work, Captain Tom has been recognised by Her Majesty The Queen, has been made an honorary Corporal of the British Army, and received a flypast at 0800, April 30th 2020 of one Hawker Hurricane and one Supermarine Spitfire.

On my original post to social media, I wrote about why I felt that I had to paint a portrait of this real British hero:

“Traditionally speaking, portraits with such a prominent subject were reserved for the societal elite – nobility, monarchs, and merchants.

In modern times, this has certainly been adapted, but in my eyes, nobody right now is more worthy of a portrait than Captain Thomas ‘Tom’ Moore.

The 99-year-old veteran of WWII’s arduous Burma and India campaigns, he has raised over £26 million, smashing his target of £1000.

When asked if he would accept a knighthood, he said it would be ‘marvellous,’ but that he didn’t do it for that reason. In my eyes, that makes Captain Moore more worthy of a ‘Sir’ before his name than anyone.

Thank you for your service, and for your continued philanthropy.” 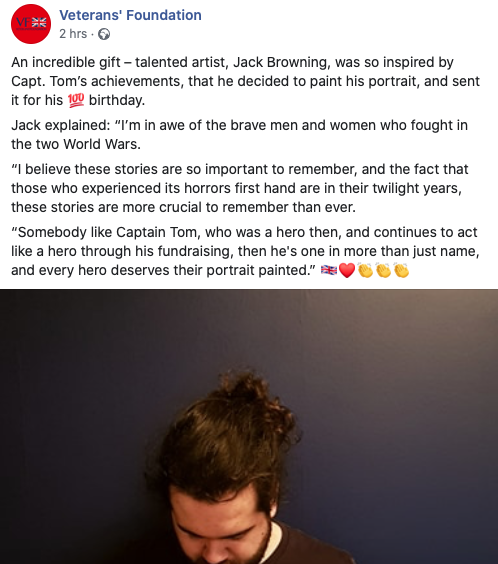 Thank you to a wonderful DPD employee named Kirsty, the painting was picked up on April 28th and reached Captain Tom’s local Post Office, where over 150,000 other cards and gifts have landed, safe and sound.

The story has so far been shared several hundred times around social media, and articles have been run by local press, my old school Westcliff High School For Boys, and the Veterans’ Foundation.

I will continue to update you as things move forward, but for now, Happy Birthday, CORPORAL Tom!

Any cookies that may not be particularly necessary for the website to function and is used specifically to collect user personal data via analytics, ads, other embedded contents are termed as non-necessary cookies. It is mandatory to procure user consent prior to running these cookies on your website.